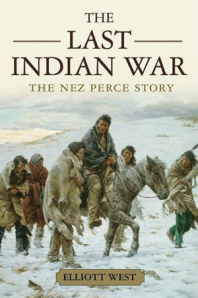 American historiography is stocked full of literature covering the Civil War and Reconstruction. The story of the Nez Perce is also and oft-told one, but in his book The Last Indian War: The Nez Perce Story, Elliot West seeks to reconsider the history of the United States during the period between 1845 and 1877. For West the phrase “Greater Reconstruction” encompasses two great events in the United States – The Civil War and its consequences, and the movement of Americans into the West – that reconstructed the nation. In revisiting this event West argues that the 1870s conflict between the Nez Perce and the US federal government should be viewed in the broader study of the Greater Reconstruction.

After giving an ethnographic study of the Nez Perce people, West divides his work into three parts. The first details the growing tensions between the Nez Perce and incoming white settlers that let to the outbreak of violence. He discusses white settlers and missionaries, as well as events, such as the Gold Rush, that brought additional settlers to the area. The second and longest sections details the beginning of war on the Idaho-Oregon border in June to the final battle in Montana the following October. During this section of his book, West’s grip on military history is clear. He gives long detailed accounts of the Battles, tactics, and maneuvers that characterized the year at war. The final section deals with the final battle and Indian defeat in Bear’s Paw Mountain, the exile to Kansas and Indian Territory, and the return of the Nez Perce to Idaho and Washington territories in the 1880s. In this section West provides an intense biographical sketch of Joseph, the Nez Perce leader who surrendered to the American government. West details how at the time Joseph received a great deal of press coverage and popularity as he was considered a curiosity.

In his narrative account of the Last Indian War, West makes use of standard military histories, memoirs, congressional records, newspaper and journal articles, and published Nez Perce accounts of the war. The published works compiled by Lucullas McWhorter, who interviewed several survivors of the war, make up an important part of West’s work. In his review of West’s work however, RW Swagerty, criticized West for not making use of new information that continues to surface years later through family oral traditions.

This flaw aside, West summarized the war and significance for the United States by tying it to the greater questions surrounding the Civil War Reconstruction Period, especially questions surrounding the nature of citizenship and how it should extend (if at all) to freed blacks and Native Americans. For West, during these years, ironically the nation became more inclusive of blacks and immigrants, while becoming more exclusive of cultural diversity, especially its indigenous population. This era, he writes, “began in conquest and expanded promise. It unfolded through appalling bloodshed, liberation, consolidation, and cultural assault. It ended with the nation fighting its last Indian war against its most persistently loyal native ally”

West in his narrative on the Last Indian War and the period of Greater Reconstruction seeks to show how the new nation of the United States was emerging and needed to find a place for the non-whites. Unfortunately for the Nez Perce there was no place for them in the new nation.