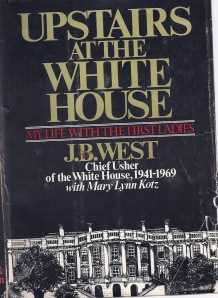 In honour of American Thanksgiving, I’ve included one of my favourite books about the Presidency, AND a recipe for apple pie. Enjoy!

It is not easy to write about the Presidency and not get political. West does just that however, and while some might be looking for more of a political slant, West does not, and will not provide it. This book must be read for what it is, an account of the presidents and their families who occupied the White House for the years that West was in service there. West’s loyalty as a White House Butler is to the White House and the Presidency itself, not to the individual men or their families.

West came into service at the White House just as Roosevelt was entering his final years. He then served in the house through the Presidencies of; Harry Truman, Dwight D. Eisenhower, John F. Kennedy, Lyndon B. Johnson, and Richard Nixon. Each family getting its own set of chapters with details about their decorations, family traditions, favourite meals, and personalities. West provides charming details into the lives of the families he worked for including how different having the Kennedy’s in the White House was, simply because they had young children, and how Mamie Eisenhower’s style broke with that of earlier first ladies in that she wanted everything to be pink and frilly. Throughout his writing however, West maintains his professionalism and never writes anything that betrays the confidence of the families he worked for.

One of the most interesting aspects of this book was the financial side of things. Presidents have a very limited salary and were always allocated a specific sum to be used to redecorate the White House. I find that even though we see the President as having a domestic life, we don’t always think about things like managing a household budget. The anecdotes that make up West’s work make this book worth reading; he puts a more humane face to the Presidency (even Richard Nixon) and provides and compelling behind-the-scenes look at life in the White House

While there are a number of White House cookbooks and websites that provide information about the favourite meals of various Presidents, in honour of American Thanksgiving I decided to make a traditional all-American apple pie.