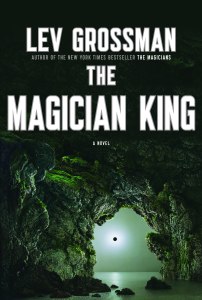 In contrast to the tested theory that the second installment in a trilogy will never be as good as the first, The Magician King was in my opinion, better than The Magicians, especially because it follows two storylines as opposed to one.

The character of Julia, the girl Quinten originally had a crush on before coming to Brakebills and meeting Alice, reappears in this story and we learn what happened to her while Quinten was obtaining a formal magical education and becoming a King of Fillory. Essentially Julia was in the admissions exam for Brakebills and did not pass. While students who are not admitted to the school normally have no recollection of the event, Julia knew something was wrong and she let that fact consume her. We learn that Julia, obsessed with becoming a magician, found an underground world of hedge magicians to train with.

While we learn Julia’s backstory, specifically how powerful she became eventually becoming a Queen of Fillory, follow Julia and Quinten as they find themselves accidentally kicked out of Fillory and struggle to find a way back.

While Grossman introduces some interesting moments in the Julia and Quinten storyline, like having to travel to Italy to speak with a Dragon and the nature of those dragons, Julia’s backstory is far more interesting and compelling to read. The book ends with Quintin once again in exile from Fillory and I’m sure the third book is all about his attempts to return. I really hope Grossman does more with the story however as I got tired of Quinten not in Fillory.