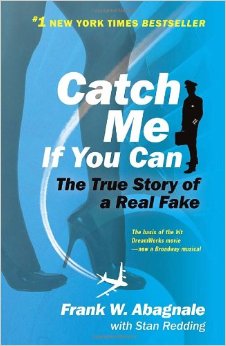 It’s quite surprising given that Leonardo DiCaprio and Tom Hanks are my two favourite actors, that I hadn’t seen Catch Me If You Can. I saw it on Netflix, gave it a try, and loved it. Obviously. The next step was to read the book, which was equally as entertaining especially since I didn’t realize that Frank Abagnale was a real person who did pose as a Pan-Am pilot among other things.

There are some striking differences between Abagnale’s memoir and the movie, most notably Tom Hank’s character doesn’t actually chase Abagnale around the world and all of his mishaps don’t really happen. Abagnale is able to avoid capture by law enforcement in multiple countries but the Detective is much smarter than the bumbling Tom Hanks.

Overall the book is a great companion to the movie. Abagnale goes to great length detailing exactly how he accomplished his multiple cons including posing as a doctor, a lawyer, and most famously a Pan-Am pilot. A con like his would be impossible to pull off in today’s internet driven world, but it’s still fun to think about and quite unbelievable what Abagnale was able to actually get away with. This was a great read and well worth it.

Recommended Reading: This article in which Frank Abagnale talks about the demise of the con artist amid the rose of cybercrime.