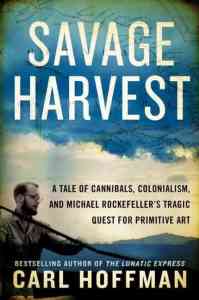 No trace of Rockefeller was even found after his disappearance and soon rumours surfaced that he’d been killed and eaten by the Asmat, a local Native tribe whose culture included ritual cannibalism. The Rockefeller family and the Dutch government vehemently denied the story ruling Michael’s death officially as a drowning. Carl Hoffman travelled to New Guinea immersing himself in the culture of the Asmat, located witnesses willing to speak publically about the event and finally “solves” the decades-old mystery; chances are that Rockefeller was eaten ceremoniously.

While Hoffman in this book claims to “illuminate a culture transformed by years of colonial rule,” the whole narrative itself seems to further perpetuate it. Hoffman is quick to criticize the decades of Dutch colonial rule in this area and points out that the “pull of the primitive” is outdated, but his descriptions of the Asmat and being around them read like a 19th century anthropological account. Here, cannibalism is still being treated like an oddity in a very voyeuristic and almost sensationalized way. It felt wrong and kind of off-putting to me. I understand what Hoffman was trying to do, but I don’t think that there was much awareness on the part of Hoffman as to his position; A white male, asking questions about another white male who died 50 years earlier. By framing his story this way, with the focus on the murder of Michael Rockefeller, Hoffman is essentially shaming the culture for their ritual practice of cannibalism, whether he intends to or not.

Maybe I’m wrong and reading too much into it, but as I was reading something just didn’t sit right. His writing is poetic and he does tell an exciting story compelling the reader to continue. I just felt like Hoffman didn’t have the same amount of respect for the Asmat as he could, or should have. His descriptions of their day-to-day lives is reminiscent of some of the 19th century travel writing I’ve come across written by Englishmen about Native Canadians. For Hoffman, the “pull of the primitive” still holds its appeal.