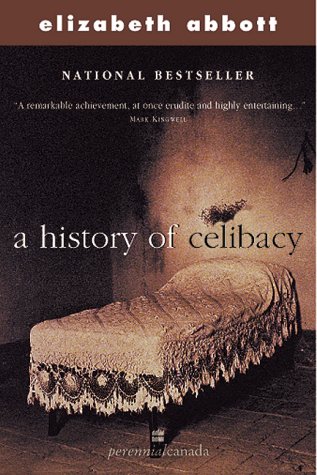 In today’s world where we spend a majority of our time being exposed to sex whether through popular culture, advertising, or online dating apps, it’s easy to think of celibacy as something restricted to the past or the very religious. In her book however, Abbott traces the fascinating history of celibacy from biblical times through to the present day looking at the way that abstaining from sex has been used to both control and empower people.

She follows a rather traditional trajectory, looking at celibacy from the earliest days of human memory through its embracing by Christianity up to the present day. The first half of the book was a bit tedious for me, but only because I never found myself that interested in early modernity. For me the most interesting discussions were surrounding the 19th century modes of respectability for both men and women. Women were supposed to be chaste, but men also had to embody “masculine Christianity” balancing masculine impulses with Victorian respectability. She also discusses the 19th century movements in America started by Sylvester Graham and John Kellogg who used food to try and control (and diminish) libido.

She definitely spends more time exploratory chastity from a feminine perspective which is understandable given the way that history has played out, but I would have loved a bit more of a discussion on the masculine dimensions. After seeing Spotlight I was looking for more of a discussion of clerical celibacy, which took up only a small portion of the overall work.

The history of celibacy is a broad and very dense topic to attempt to explore in a single book. Each chapter of Abbot’s could have been a volume of work unto itself. This is a good overview and jumping off point for those looking to learn more about celibacy and the way it has been prevalent through history.