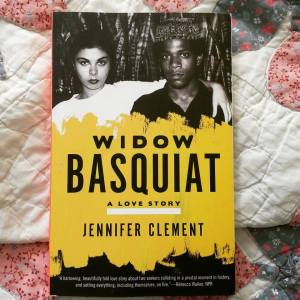 After finishing Widow Basquiat I decided to head down to the AGO to see the Basquiat exhibit on now until May 7. I was both pleased and disappointed: Disappointed that Suzanne was not mentioned at all but pleased because the exhibit does send a powerful message. Black Live Matter.

I quite enjoyed the book. It focuses on Basquiat’s relationship with his muse Suzanne and their sordid relationship. It’s told through a series of vignettes but written like a lyrical poem. Suzanne’s own words and memories are mentioned, in italics, alongside the author’s retelling of their story. It’s another tale of love and heartbreak between talented people set in New York, much like Just Kids.

You can read all my thoughts on the exhibit here.

While Black History Month is almost over, I saw this in Barns and Nobel in New York and had to pick it up. Much like I had been reading Generation X in anticipation of the Douglas Coupland exhibit at the ROM, I’m hoping to read this before I go to see the Basquiat exhibit at the Art Gallery of Ontario.

Jean Michel Basquiat became one of the best known avant-garde artist and painter part of the 1980s art scene in New York. This book provides insights into the relationship between Basquiat and his lover and muse, Suzanne Mallouk a Canadian runaway. Jennifer Clement is well known for her beautiful prose, and I have no doubt that she has excelled in telling this unorthodox love story.