Religious fanaticism is something that interests and intrigues many people because more often than not it is something so far outside their own experience. In his book, John Krakauer looks at radical Mormons who have done unspeakable things in the name of God specifically looking at the double murder committed by Ron and Dan Lafferty.

Krakauer manages to weave together a number of stories in his work; the history of the Mormon Church, the contentious battles over polygamy; the rise of more radical factions; and finally the details surrounding the brutal murder committed in 1984. The Mormon Church makes up a strange part of American history and had been a subject of persecution, mockery and ridicule. Krakauer sidesteps this and focuses on how dangerous religious fanatics can be, especially when they believe God has told them to murder.

While the chapters surrounding the history of the CHurch and competing ideologies were interesting I found myself most intrigued by the chapters dealing with the Lafferty’s defence. Ron Lafferty refused to plead insanity believing so firmly that God had ordered him to kill their sister-in-law Brenda and infant niece, Erica. This cause a lot of stir among the American public; how can you claim that someone who speaks to God is insane without condemning others (albeit others who do not kill) who claim the same thing.

It was definitely an interesting book, and brought up a lot of questions surrounding just how tricky it is to persecute and hold religious fanatics accountable for their actions. Tragedy is always intriguing especially when it is so far outside our own experiences. For some however, this story probably hits quite close to home. 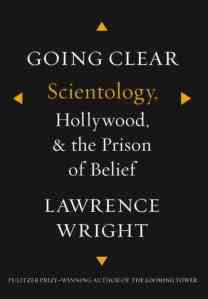 After reading all the hype about the recently released documentary, I decided I wanted to the read the book first. Scientology has been a joke in popular culture for a while now, but the treatment it gets in many shows and cartoons, detracts from some of the seriously troubling aspects of this organized religion.

Wright’s book looks at the history of Scientology from its roots to the present day, focusing in on famous figures like R.L Hubbard and his family. Hollywood director, Paul Haggis, a former Scientologist, serves as a key player in this story. It was in fact Haggis’ experience with Scientology that prompted Wright to write this book. It was interesting, informative and shed light on some of the darker sides of Scientology without being too disparaging.

One of the most interesting things was reading the history of R.L Hubbard, and how the idea of Scientology developed alongside other occult-type groups in the early 40s and 50s. It was unsurprising that Hubbard was a science fiction writer given the fact that Scientology sometimes seems like science fiction itself. Wright also takes a look at some of the rumours surrounding the darker sides of Scientology as well as the reasons why celebrities seem so drawn to it.

I have read a number of articles and books written by Wright and know that he is a pretty respectable journalist. He does an amazing job in this book of looking at Scientology in an honest and open way. In the end, Scientology is still technically a system of belief and there are practitioners out there who follow it, and not all of them are bad people. In a way, Wright points out that Scientology is not all that different from other organized religions that all have dark moments in their history (think of the Catholic Church in recent years, or ever really).

While there are still a lot of problems with the top levels of the Church of Scientology (seriously, look up SeaOrg and GoldBase on wikipedia), it does not mean that everyone who decides to follow the religion is automatically a terrible person. This was a balanced and fair read, and I’m interested to see if this translates to the Documentary

I don’t want to start any controversy or get into any arguments surrounding religion. I will say that while I’m not sure if I agree with everything that Richard Dawkins is saying in his book, he does a great job of ripping apart organized religion.

As a typical middle-aged British man, Dawkins writes in a dry snarky and sarcastic way that I love and identify with. He does not however, come off as being an “angry” atheist and merely prefers to point out the absurd things that people have done, often in the name of religion.

I was pleasantly surprised to see that his tactic was to use humour rather than to write a lengthy angry diatribe on religion. (He uses Fawlty Towers and Monty Python to illustrate examples and drive his points home). He included some of the hate mail he has received from religious extremists and responds to them with great even-temperament and humour, often times asking obvious questions, (If God is all powerful, why does he need you to defend him with violence?)

Whether or not you agree with Dawkins’ views, I highly recommend the book. It is a critical look at organized religion done in a very inoffensive way. (Although I know some people find it offensive, I fell like more moderate people would not). It’s funny and Dawkins does not take himself too seriously at all.

Probably the most absurd book I’ve read in a while, which speaks volumes about the time that it was written (1976).

The novel follows the life of Sissy Hankshaw, a white trash woman born with enormously large thumbs who considers her mutation to be a gift as it aids with her hitchhiking, her preferred mode of travel. Living as a hitchhiker, Sissy soon becomes a model for The Countess, a male homosexual tycoon of feminine hygiene products. The Countess also owns a ranch, operated by sexually open and promiscuous cowgirls. Through her travels Sissy meets the cowgirls and many other interesting characters including “The Chink,” an escapee from a Japanese internment camp who becomes hailed as a hermetic mystic. Through her travels Sissy explores her own sexuality through her interactions with various characters.

This is definitely a “hippie” novel exploring themes such as free love, drug use, political rebellion, animal rights, feminism, and religion, in a strange yet wonderful way. The chapters are short and are often filled with philosophical diatribes and short quips in which Robbins inserts himself as a character. It’s not really the type of book that I normally enjoy reading, but I had a good time. The movie was considered to be an overwhelming failure, but I think I’d still like to watch it, the trailer looks just as insane as the book was to read.

This novel was such a pleasant surprise. I picked it up for about three dollars at the BMV and read it based on a recommendation from my grandmother. While it wasn’t one of those books that sucked me in from the get go, the slow build led to some fantastic characters, events and conclusions.

Essentially the novel focuses on Major Earnest Pettigrew, a British widower living in the English countryside obsessed with tradition and gaining ownership of his father’s guns (there are two; one which went to Major Pettigrew and one to his brother). As traditional and upright as Major Pettigrew is, he is not nearly as stuffy as some of his fellow residents living in Edgecombe County.

The novels plays out through Major Pettigrew’s interactions with his neighbours, his Yuppie son who he can’t seem to figure out, and with Ms. Ali, the Pakistani shopkeeper who is also widowed. In then end Major Pettigrew must decide what he values more and if a relationship with Ms. Ali is worth turning the village on its head for.

I liked this novel because it was fresh and humorous, in a very dry and very British way. The scene where the Golf and Country Club Major Pettigrew is a member of throws a charity dinner with a Moghul theme is completely absurd but so vividly described that you can actually picture the event and feel the reactions of both the British Society Ladies and the Pakistani women who are in attendance. Simonson spends a lot of time exploring rifts in culture, between British and the Pakistani Community, as well as generational; between Major Pettigrew and his son Roger, or Ms. Ali and her nephew Abdul Wahib.

The book was a light and fun read and anyone who’s a fan of movies like The Quiet Man, or Saving Grace, is sure to love this book as well.