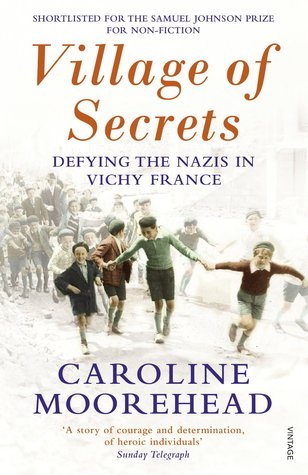 In her previous work, A Train in Winter, Caroline Moorehead profiled a group of French women instrumental to the resistance in France. She followed their journey to concentration camps where many perished. Her newer work, Village of Secrets, looks at the French resistance from a different angle focusing instead on the residents of the French Village Le Chambon-Sur-Lignon.

In 1990 this town was one of two that were recognised as righteous among nations by Yad Vashem for being a safe haven for Jews during the Second World War. According to Moorehead, residents of the village secured the survival of at least 800 Jews by hiding them (many of them children) and helped an additional 3,000 get safely across the border to Switzerland.

There is an impulse to celebrate the Resistance, especially in France as the country struggles to cope with the existence of the Vichy regime and those that were complacent or even supportive of the Nazi’s. Celebrating an entire village is difficult however and there are naturally those that exist in a grey area. The world was not divided into Nazi’s and the Righteous and many kept their heads down in order to simply keep themselves alive. Still the efforts of those that risked their lives to save Jews from Nazi hands are extraordinary and they must be applauded.

At the end of her work, Moorehead follows those that were saved and survived, but the book ends on quite a melancholy note. Even in stories of the resistance and the good they did, the stories of the children get lost. Many of the children’s lives were saved but often they didn’t have a life to go back to. Instead they had to live with family they never knew, family they ceased to know, survivor’s guilt. Those who banded together in grief often fared better than those reunited with family. The Holocaust, and the efforts to save Jews, created an entire generation of orphans because the impulse to save the lives of children is often the strongest. Many of the survivors are quoted about how they struggled with being grateful to those that rescued them while also combating feelings of resentment for being torn from their families even though staying together meant an almost certain death.