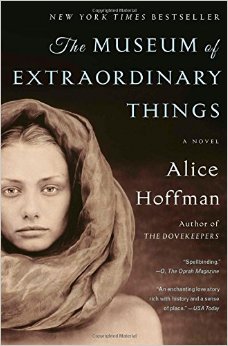 I’d heard of Alice Hoffman, author of The Dovekeepers, but never took the time to read anything she’d written. I fell in love with this book quite fast, and not only because it deals with some of my favourite subjects, (freakshows, immigrants living on the Lower East Side, The Triangle Shirtwaist Factory Fire), but because Alice Hoffman is an incredibly talented and beautiful writer.

Through her novel Hoffman traces the stories of two characters, Coralie, a young girl who spends her days serving her cruel father, Professor Sardie, and serving as one of his living wonders at The Museum of Extraordinary things, and Eddie Cohen, a Jewish boy who turned his back on his faith and makes a living as a photographer. The two lives intersect in various ways as they both attempt to help the other escape.

Hoffman is such an amazing writer, telling a story in such vivid detail. It’s been a while since I found myself completely lost within a book, but it was quite easy to do with this one. The characters are flawed and relatable and there is the perfect mix of intrigue and whimsy. Set against the backdrop of the Coney Island boardwalk and the Lower East Side Tenements, this book was a fantastic snapshot of New York City at a particular moment in time.